Relevance means that the audit procedure should be relevant to assertion. For example, confirmation of balance from a customer is a relevant evidence as regards existence of receivable, but it may not be relevant as regards collectability of the balance due from customer Also, physical observation of inventories is relevant evidence relating to existence, but is not appropriate evidence to ensure that the entity owns the inventories. Similarly, when carrying out a completeness test, the auditor will not test sales invoices to delivery notes as it does not constitute a relevant evidence to ensure that all shipment have been billed to customers.

It is difficult to set out precisely as to what constitutes sufficient audit evidence. The Standard sets out certain indicators to judge the sufficiency and appropriateness of audit evidence:

FACTORS WHICH AFFECT THE RELIABILITY OF AUDIT EVIDENCE.

Other information known to outsiders

The frauds under two court cases Ultramares and Mcksson & Robbins could not be detected by ·auditor if independent outside confirmation of accounts receivable and inventories were not obtained.

b) The more effective is the design and operation of the internal controls, the more reliable will be the audit evidence.

COST VS USEFULNESS OF THE EVIDENCE

Assume that the total account receivable of company are as follows: 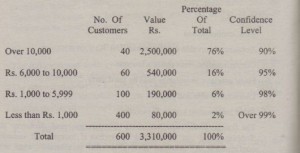 Obviously the cost of obtaining additional 400 confirmations will be out of proportion to the usefulness of such evidence.

The ISA 500 sets out six means of gathering audit evidence. Generally all these six techniques will be not be applied to all account balances. However, in verifying some of the accounts, the auditor would use all the techniques. For example, inventory verification will involve:

The auditor should relate the above procedures to management assertions. To continue the example of inventories, a relationship of assertions and procedures for gathering evidence is demonstrated as follows: 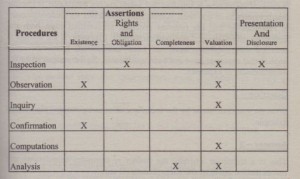 Posted on November 3, 2015 in Audit Evidence