Raw materials and other materials which can be directly identified with production would normally constitute major part of the cost. The cost of raw materials, both in quantities and value, as given in the statements, should be verified. In case the transport cost of raw materials is a significant element of cost, as in the case of cement and sugar industry, the transport cost is determined separately. In case of imported raw materials, the various elements are: FOB value, ocean freight, insurance, custom duty, clearing/forwarding and inland freight. Withholding income tax and sales tax would be separately accounted. Raw materials are the materials which directly go into the process of manufacture and physically constitute   part of the product; whereas there may be some direct materials, which are directly identifiable with the production process but only help production Materials which are relatively insignificant value viz. Direct material although may be directly conductive to production also classified as indirect material. Data for raw materials consumption have to be provided for the year under audit, as well as for the previous two years, for comparison.

Components and parts in the case of engineering industries are referred to as direct materials. Materials consumption would normally refer to materials consumed in production .. Every cost auditor possesses knowledge how the figure of material consumption is worked out by deducting closing inventories, from the receipts and adding opening balance Consumption of materials should be carefully checked with the issues to production processes. The use of the term “major raw materials”, in para 4 of Appendix III to the Companies (Audit of Cost Accounts) Rules 1998, indicates all direct materials; some of which may be small in quantity and value but large in number, which may not be reported as required in this same para. Provisions of the cost accounting record rules should be kept in mind, as the rules also specify accounting requirements for raw materials and other direct and indirect materials.

Comparison with Standards or Estimates:

Various clauses of para 4 of Appendix III, provide for comparison of the consumption of major raw material with the standard requirement if any. .. standards have not been worked out, there should be estimates on the basis of which management of the entity exercises control. In the absence of an estimate, the cost auditor should arrive at a standard or estimate, on e basis of his knowledge of the industry, as mentioned in this Handbook, earlier. Variances from the standard or estimate and from the figures of the “preceding two years”, should be looked into and commented upon by the cost auditor in his report .

The relevant cost accounting record rules generally provide the manner in which the record of cost and quantity of raw materials shall be maintained and how the cost is arrived at. The cost of raw materials includes all direct charges up to works, such as freight, inward transport handling, insurance etc. The basis of “costing of raw material should consistently followed”, and should be commented upon by the cost auditor.

Components of Cost of materials:

Cost accounting record orders/rules may provide the manner in which cost of purchases, cost of inspection and receipt should be included in the cost of the raw materials. The cost auditor should examine the procedures being followed in procuring, planning, purchasing, transporting, receiving, inspecting, that is all procedures and costs involved in making the materials available all the point of the production process. Moreover, realizable value of any waste material or by-product, which may have adjusted the cost of raw materials, be carefully considered and treated in accordance with the normal or standard cost control practice followed by the industry, according to the knowledge the cost auditor may have.

Para 5 of Appendix III of the Companies (Audit of Cost Accounts) Rules 1998 provides that in the Cost Auditors Report particulars relating to: 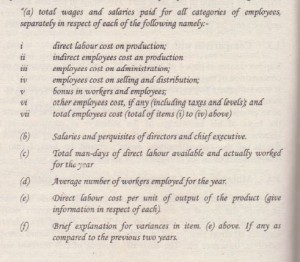 Provisions of the cost audit rules in regard to the cost auditors report quoted in the foregoing para, requires the cost auditor not only to carry out a fairly comprehensive analysis of all wages and salaries paid to all categories of employees,. from the Directors and Chief Executive to workers employed for production, administration selling and distribution, but also to examine any incentive schemes and the contribution such schemes made to achieving more production, higher productivity and their effect on the cost of production Added marginal cost may be justified to achieve higher production to meet the public demand.

Total man-days of direct labour available and actually worked, during the year, direct labour cost per unit of production; and average number of workers employed for the year, with explanation for the variances in the direct labour cost per unit of production, should be compared with the previous two years, and necessary comments on the comparison, included in the Cost Auditors report.  Detailed study of employees and employee related costs, considerably enlarges the scope of the cost auditors report.

Partly to safeguard against any unfavourable change in the import policy, industrial units in Pakistan generally overstock imported stores and spares. The cost auditor, while examining the list of stores and spares should pay particular attention to the ageing of inventories. He should point out such slow moving items in which there has been no movement over the last twenty four months.

Complete record of costs and quantities of all types of power, fuel and energy such as electricity, compressed air, gas, steam, feel oil, compressed air and electricity which may be generated/produced by the industry, should be available.

The cost and quantity consumed for production shall be shown in the relevant annexures, as required under the applicable cost accounting record order/rules. The records hall be so maintained as to enable assessment of consumption of power by different departments or manufacturing units or cost centres on a consistent basis. Allocation of cost shall be on the basis of actual consumption, if separate meters, measurement devices are installed; or on the basis of technical estimates, if separate measurement devices are not installed.

Adequate record should be available to ascertain the cost of furnace
oil/gas other energy material purchased and charged to various departments/cost centres. If the cost of furnace oil or gas etc. is allocated to different departments on basis other than actual cost, reconciliation with the actual cost and the treatment of variances should be indicated in the records.

Record of receipts and issues should be so maintained as to clearly show any excess to shortage at the time of stock taking.

Power and fuel cost as a percentage of cost:

The cost auditor should examine, the power and fuel cost as a percentage of the total cost. Energy costs have become important, not only because of the rising trend to prices, but because of scarcity of the material. Energy has to be conserved.

In case any residuary inputs, such as bagasse in the sugar industry, are used as a source of energy, quantification and evaluation of such inputs should be examined. Both energy consumption and possible conservation should be discussed with the technical staff of the company. Moreover progress made in implementing any energy conservation plan, indicated by management in the Directors reports presented in AGMs, should be examined and commented upon in the Cost auditors report.

Record of costs incurred on in-house repair and maintenance facility
shall be examined and the basis or which the cost is allocated to various departments shall be examined. Some repairs and maintenance may have been carried out by outside contractors. Maintenance policy should be examined from cost benefit point of view. As regards the in-house maintenance facilities, classification of activities for activity based costing ABC, may be a part of the maintenance policy. Indirect Material consisting of operating supplies/consumable stores, as already observed, may be charged direct to production, but such indirect materials as are required for break-down maintenance (stores and spares) and for regular periodical/planned maintenance, shall be allocated on the basis of usage of maintenance service actually provided to various departments.

Cost accounting record order/rules require that record of all fixed assets, in respect of which depreciation is to be provided shall be maintained. Depreciation is charged according to the depreciation policy of management, which may be on a straight line or reducing balance method, based on the useful life of the asset. Any basis adopted should be consistently followed. If any basis, other than the useful like of the asset, is followed, the impact of providing excess or less depreciation, should be pointed out.

Provisions of the Companies Ordinance 1984 in regard to depreciation should be kept in view, the Claus F of part III of the Fourth Schedule of the Ordinance:

Overheads is a well defined and well understood term. Accounting to para 8 of Appendix III of the Companies (Audit of Cost Accounts) Rules 1998, the total amount of overheads should be identified and divided into four categories; factory overheads, administration overheads, selling and distribution overheads and financial charges.

Reasons for significant variations in the overheads, compared with the previous two years, have to be given in the cost auditors report. Providing item-wise break-up into factory overheads,  administration overheads, selling and distribution overheads and of financial charges, would go to make the audit report more meaningful. If not all, significant items may be so analyzed.

The basis of allocation/apportionment of overhead cost to cost centres should be in accordance with the accepted principles of cost accounting, qualification of services rendered by services to cost centres, or on the basis of activities which are cost drivers.