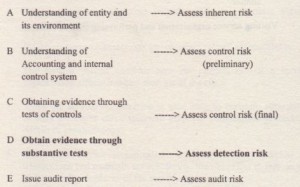 DIFFERENCE BETWEEN TESTS OF CONTROLS AND SUBSTANTIVE  PROCEDURES

Tests of controls are generally applied to provide evidence as to assertions about transactions during the period. Substantive tests are performed to obtain direct evidence as regards financial statement accounts.

Verification of sales invoices as to occurrence

To determine that sales invoices are independently matched with delivery notes.

Substantive procedures
Objective
To determine that sales “have been correctly reflected in financial statements. (Occurrence, presentation and disclosures)

Corroborating audit evidence may be available both form the client and from outside sources. Examples of evidence available from client are cheques, purchase orders, sales invoices, delivery notes, minutes of meetings, and inquiry from client’s personnel. External evidence includes confirmations from customers and suppliers’ for entity’s assets held by third parties and letters from the lawyers.

Tests of details of transactions and account balances, and analytical procedures

The audit risk model, therefore, can be extended as follows: 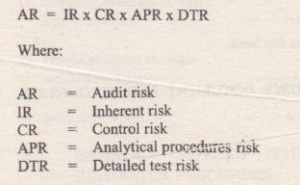 The formula can be modified as to determine detailed test risk:

AUDIT EVIDENCE IS GENERALLY PERSUASIVE RATHER THAN CONCLUSIVE.

Persuasive means any evidence that may cause a person to believe a fact. Conclusive means decisive and convincing. In many cases the auditor has to rely on evidence which is only persuasive rather than conclusive. This is because generally it is difficult to obtain conclusive evidence.

The auditor will verify ownership of land by inspecting title deeds. The auditor is not an expert on authentication of documents. It would be enough for him to verify that the deeds are prima facia in order.

In order to evaluate adequacy of allowance for doubtful accounts the auditor has to rely on evidences which are persuasive because it is difficult to obtain a conclusive evidence as to how much of the receivable will actually be collected. The auditor will have to use his judgment in evaluating adequacy of the allowance for doubtful accounts by obtaining some persuasive ,evidence. Such persuasive evidence will include:

• Review of aging schedule
• Review of collection history
• Inquiry from the client on the collectability of balances.

The above evidences are by no means conclusive that the allowance for doubtful account has been correctly stated.

Also, when a loss contingency exists, the likelihood that a future event may occur can range from probable to remote. It may be difficult to make a reasonable estimate of the amount of the contingent losses. In such cases there is no way to obtain evidence on such matters from the company lawyer. Such evidence will only be persuasive and not conclusive because the lawyer himself would be unable to give an opinion on an unsettled litigation.

The sufficiency of audit evidence means deciding as to what extent the evidence should be obtained to achieve the required level of assurance. The amount of evidence required depends in part on the degree of risk of misstatement, the materiality of the item, past experience with the client and the quality of information available.

(a) the relevance of evidence and
(b) reliability of evidence in verifying a particular assertion.

Posted on November 3, 2015 in Audit Evidence