Accounting to sub rule 3 of rule 4 of the Companies (Audit of Cost Accounting Rules 1998:

Appendix III referred to in sub rule 3 of rule 4 of the Companies (Audit of Cost Accounts) Rules 1998, particulars which have to be included in the cost auditors reports to the directors of the company, have been enumerated. Most of the particulars which should be included in the cost auditors report have been discussed in the foregoing chapters of this Handbook, while describing performance of cost audit procedures. Evaluating the cost accounting system has been described in chapters VII. Audit of capacity utilization, production, raw materials, wages and salaries, stores and spares parts, have been explained in chapters V. Audit of depreciation, overheads have been elucidated along with other important elements of cost, in chapter VI. The remaining items given in Appendix III, which have to be commented upon in the cost auditors report are given in the paragraph which follow.

Industrial units which have acquired technology under some agreement, have to pay royalty or make some technical assistance payment, which account should appear as part of the cost of the product. The cost auditor evaluates the total amount of such royalty/technical aid fee payable for the year and see that the amount is in accordance with the agreement. Such amount forms a part of the cost of production and its incidence on per unit cost should be computed. Cost auditor should also look into whether: (i) the agreement is legally in force and (ii) the agreement is in line with the laws and regulations.

If there have been any abnormal and/or non-recurring features affecting production during the year, such as strikes, lock-outs, major break-downs in the plant, substantial power cuts, serious accidents etc., they should all, as far as practicable, be mentioned in the cost auditors report and their impact on the cost of production  should be indicated. Similarly, if some abnormal and/or non-recurring costs were incurred during the year and were directly allocated to the cost of the products under reference, the total amount so allocated and the incidence on the per unit cost, should be indicated in the cost auditors report.

Abnormal and non recurring cost should be tested both for principle and materiality. As a result of any unusual event, like major break-down, sabotage etc., considerable wastage of material inputs may have occurred. The cost auditor should consider all aspects and not just take the impact of total fixed expenses on the cost of production.

The cost per unit of each category, variety, or quality of the product under reference, with comparative figures in the previous year, and comments on the reasons for differences should be included in the cost auditors report. Such an analysis and comparison will also help in reconciling the total cost of the product under reference with the total cost of production, which can also be worked out from the figures given in financial accounts. Figures of financial accounts include provisions, allocation and appropriation of expenditure, which may have been paid in the previous year or may be paid in the next year, but relates to the current” years production If there are any such adjustment made in the financial accounts these should become obvious as a result of reconciling the cost accounting information with financial accounts. Moreover, it is necessary to determine cost of different varieties, qualities of each product in order to make an analytical study of the contribution made by each type of product.

Although cost of selling has been dealt with in the earlier chapter of this Handbook, according to para 12 of Appendix III of the Companies Audit of Cost Accounts) Rules 1998, sales in quantity and net sales realization of different categories, varieties or qualities of product under reference, showing the average sales realization per unit, should be shown in the cost auditors report. If the “Product under reference is exported, net realization per unit, countries to which exported, indicating the profit or loss in export “, should be specifically explained in the cost auditors report. Sales of different quantities and qualities of the product under reference, can help to make an interesting and useful study of contribution analysis. If it is possible to increase the volume of sales of such qualities or quantities as are yielding a higher contribution, it should be possible  or the company to increase its profits. In the case of export, it may be observed that export to every county, to which the product under reference was exported, may not be yielding the same amount of profit per unit. The reasons can be many such as a better price on one country or higher cost of packing and higher amount of freight, incurred in exporting to another country.

Accounting to para 13 of Appendix III,

should also be identified in the cost auditors report. This exercise would help in studying the contribution made by sales of different quantities and different varieties of the products, also profitability of different market segments. Larger quantities result in longer, continuous production runs, and should normally yield a higher amount of profit compared to smaller quantity produced wastages and other overhead costs.

In order to evaluate the company’s financial positron and profit performance, the cost auditor performs checkups on various aspects of the company’s financial “health. A tool frequently used during these checkups is working out “financial ratios”. Ratios provide a basis of carrying out both internal and external comparisons. A financial ratio, which relates two accounting numbers, is obtained by dividing one number by the other. Ratios can be used for comparing changes within the company from period to period, or may be used for comparing the position with company.

Financial ratios may compare the financial position or profit performance of the company. For comparing the financial position balance sheet figures are use and for comparing the profit performance, figures of the profit and loss account are used. From the balance sheet figures, financial leverage, or the gear ratio, which are from the debt ratios may be calculated. These ratios show the extent to which the company is financed by loans. Cost and management accountants are quite familiar with such gear ratios. Liquidity ratio measures the company’s; ability to meet short term obligations. From the profit and loss account figures, leverage ratio may be calculated which relates the financial charges of company to its ability to service or cover them. Activity ratio measure how effectively the company is using its assets. Various profitability ratios are also worked out, which relate profit to sales and to investment.

Para 14 of Appendix III of the Companies (Audit of Cost Accounts) Rules 1998 is important, particularly as for as it requires the cost auditor to make such observations and conclusions, with which the management of the company may not agree. These observations and conclusions should be made on the basis of reliable cost audit evidence. The provisions of the para quoted here, should be carefully noted: 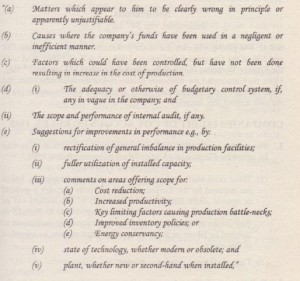